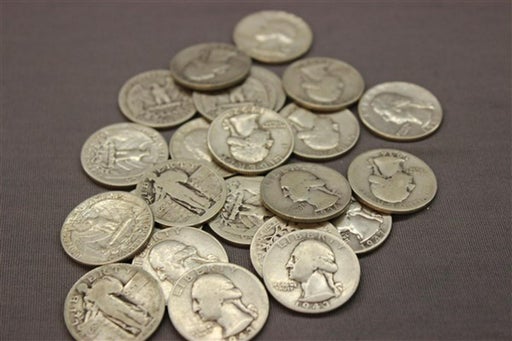 Junk Quarters are a popular option for silver investors. The coins command some of the lowest premiums above the spot price of silver than most other bullion. They are also abundantly available and widely recognized.

Modern coins from the US Mint, such as the American Silver Eagle carry a hefty premium and higher prices. Junk silver quarters are an alternative for investors and preppers. The are a commodity that is highly liquid, fractional, easy to buy at low cost, are widely recognized and can be easily traded if the need ever arises.

Types of 90% Silver US Quarters

The coin was introduced on August 1, 1932 to commemorate 200 years since the birth of George Washington. Several minor redesigns were introduced before the coin’s retirement in 1965. In 1976, a special edition marking 200 years of the United States was issued. Since then, the coin’s design has been featured in several other special collections, most notably in the America the Beautiful series of coins.

The original coin displays a bust of George Washington on the obverse (front), accompanied by the inscription “LIBERTY” above the bust. Below the bust includes the minting date and “IN GOD WE TRUST” to the right. The mint mark is also on the right side.

The reverse (back) face features a bald eagle with the inscriptions “UNITED STATES OF AMERICA” and “E PLURIBUS UNUM” above and “QUARTER DOLLAR”.

All quarter dollar coins from 1931 until 1964 were made with 90 percent silver and 10 percent copper. Their metal composition and silver content is similar to earlier quarters.

The Standing Liberty quarter replaced the Barber quarter in 1916. It was minted until 1930. Hermon Atkins MacNeil, a prominent sculptor at that time provided the initial designs.

Standing Liberty quarters remained in production until 1930 when it was discontinued prior to the release of the Washington Quarter. The Philadelphia Mint was the primary facility for the production of quarters. Those produced as the Philadelphia mint will not have a mint mark. Some quantities were made in San Francisco and Denver and those will display a corresponding “S” or “D” mint mark.

The obverse (front) of the coin features a portrait of the Lady Liberty Standing and facing to her left. A shield is in her left hand and an olive branch is in her right. The inscription “LIBERTY” is above the portrait. The minting date is inscribed below.

The reverse of the coin features an eagle in flight in the center. Surrounding the eagle, the words are the inscriptions “UNITED STATES OF AMERICA” around the top edge and “QUARTER DOLLAR” is inscribed around the bottom. The inscription between the eagle’s wings is “E PLURIBUS UNUM”. 13 stars representing the original colonies are also found on the reverse.

The Standing Liberty Silver Quarter has the same weight and size specifications as both the Washington and Barber silver quarters. It is made of the same 90% silver, 10% copper alloy and contains approximately 0.179 troy ounces of silver.

The Liberty Head “Barber” quarter was introduced in 1892. The Barber series included a half dollar, quarter, dime, and nickel. The designs for all four coins were created by the US Mint Chief Engraver at that time, Charles Barber.

Barber’s designs were chosen after only a few other artist had submitted designs for the competition.

Minting of the Barber Quarters began in 1892. The coins were produced for 24 years until being replaced with the Standing Liberty design in 1916.

The obverse of the Barber Quarter shows the head of Barber’s Lady Liberty along with the inscription “UNITED STATES OF AMERICA.” The mintage year is engraved beneath the portrait of Liberty.

On the reverse of the coin there is a wreath which wraps around the denomination in the center. The quarter coin weighs 6.25 grams and is 24.3 mm diameter. The silver content in each coin is considered to be approximately 0.179 troy ounces after factoring some allowance for wear due to circulation.

The US mint switched over to copper-nickel alloy beginning in 1965. The last Junk Silver quarters are minted with the date 1964. Along with junk silver dimes, they are one of the most affordable ways to buy silver bullion. There are three designs of silver quarter coins that are commonly available, though Silver Washington Quarters remain the most popular and widely available.

Despite the “junk” nickname, these quarters are quite popular with investors and will always be easy to trade.