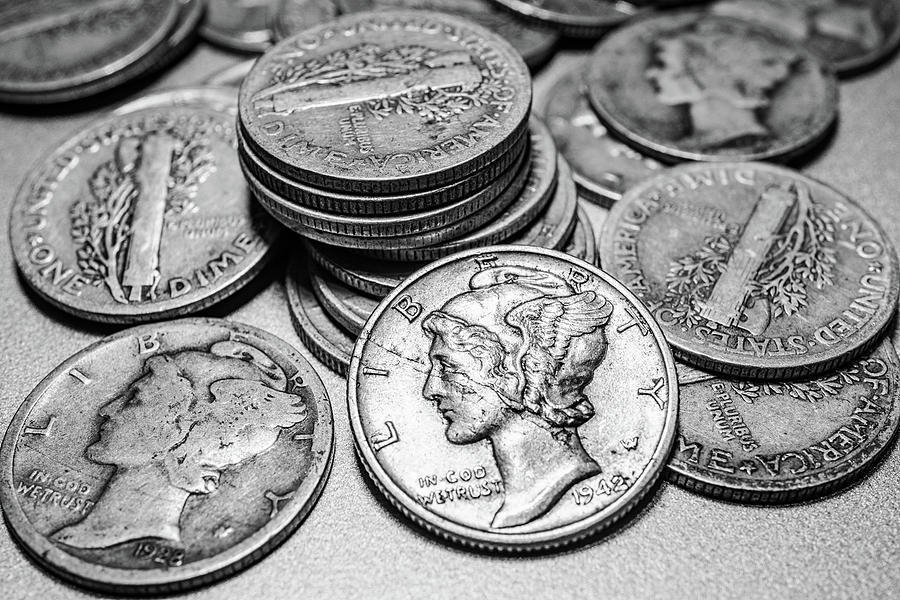 Silver dimes were in circulation throughout the United States from 1892 until 1964. During that time there are three common varieties of dimes.

The Barber Dime, named after the designer, Charles Barber. The Mercury Dime, named from the depiction of Lady Liberty that looks similar to the Greek God Mercury. The Roosevelt Dime, created after the death of President Franklin D. Roosevelt.

These three types of silver dimes were minted with 90% silver. Silver dimes are one of the most common forms of junk silver.

Preppers love silver dimes because coin is a fractional piece of silver. Each coin contains roughly .07 troy ounces of silver. Due to their fractional nature, dimes are an excellent choice for those prepping for a financial disaster that believe bartering may become a way of life.

A single silver dime has the current melt value of $0 based on the current silver spot price of $0.

In the event there is some sort of total financial collapse and people begin to barter for goods and services, having fractional silver will be a key part of any survival strategy.

Coin collectors and numismatists love silver dimes because there are so many unique varieties and variations. A complete set of Mercury Dimes including all mint marks and dates contains more than 70 coins. Die variations and error coins add even more to collect.

The Barber Dime was introduced in 1892 and was designed by the US Mint Chief Engraver Charles Barber. Barber silver dimes follow a similar design pattern as the Barber half-dollar and Barber quarter designs.

The obverse face shows Lady Liberty wearing a crown made from an olive branch with a headband inscribed with the word “LIBERTY”.

The reverse displays a wreath made from corn, wheat, maple and oak leaves that surrounds the denomination “ONE DIME” in the center.

The Mercury Dime, or Winged Liberty Head Dime, got it’s name because of the depiction of Lady Liberty on the obverse of the coin. This coin, designed by Adolph Weinman, shows Lady Liberty wearing a winged phrygian cap. Around the time of Mercury Dime’s debut, many in the general public confused Lady Liberty with the Roman god Mercury.

Mercury dimes were common in pocket change until the 1960s. After the US Mint changed the alloys used to mint dimes in 1965, many Mercury Dimes were pulled from circulation by collectors.

Today, Mercury Dimes are sought after by both coin collectors, preppers and precious metals investors due to their silver content. Many of the Mercury Dimes that you can buy today are in generally good condition with most showing some signs of the detailed features being worn away from circulation and wear.

The Roosevelt Dime is the most familiar of all the dimes that you will typically find amongst junk silver. The Roosevelt Dime replaced the Mercury dime in 1946 shortly after the death of President Franklin D. Roosevelt. The design introduced in 1946 is still in production and circulation today with minimal changes.

Roosevelt Dimes minted before 1965 were minted with the same 90% silver alloy used in quarters, half dollars and dollar coins.